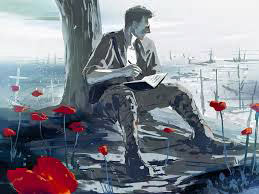 In Flanders Fields
By John McCrae

In Flanders fields the poppies blow Between the crosses, row on row,
That mark our place; and in the sky
The larks, still bravely singing, fly
Scarce heard amid the guns below.

We are the Dead. Short days ago
We lived, felt dawn, saw sunset glow,
Loved and were loved, and now we lie,
In Flanders fields.

Take up our quarrel with the foe:
To you from failing hands we throw
The torch; be yours to hold it high.
If ye break faith with us who die
We shall not sleep, though poppies grow
In Flanders fields. 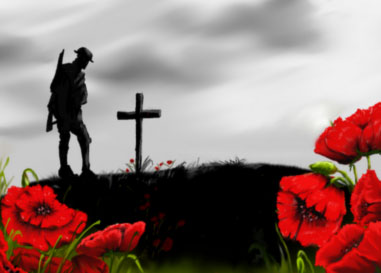 Buddy Poppies are assembled by disabled and needy veterans in VA hospitals.

The VFW Buddy Poppy program provides compensation to the veterans who assemble the poppies.  It also provides financial assistance in maintaining state and national veterans’ rehabilitation and service programs, and partially supports the VFW National Home for Children.

From its inception, the Buddy Poppy Program has helped the VFW live up to its motto, “to honor the dead by helping the living.” The Buddy Poppy – small red flower symbolic of the blood shed in World War I by millions of Allied soldiers in defense of freedom – was originally sold to provide relief for the people of war- devastated France. Later, its sale has directly benefited thousands of disabled and down-and-out American veterans.
The poppy program actually got its start on the other side of the Atlantic Ocean. Shortly after World War I, Madame E. Guerin, founder of the American and French Children’s League, became concerned that the free world was “forgetting too soon those sleeping in Flanders Fields.” Inspired by Canadian Lieutenant Colonel John McCrae’s poem, “In Flanders Field,” which spoke of poppies growing in an Allied graveyard “between the crosses, row on row,” Guerin decided on the poppy as the most appropriate memorial flower. She began attending the conventions of any serviceman’s organization that would allow her to speak. Her request was always the same – to enact the following resolution: “Be it resolved that every member, if possible, and his or her family shall wear a silk red poppy.”
The poppy program was quickly embraced by the people of France, and also secured the sponsorship of the Prince of Wales, the Governors General of Canada, Australia, and New Zealand, and the President of Cuba. In each of these countries, veteran’s organizations and their auxiliaries agreed to sell memorial poppies for the benefit of the children of France.
In April 1919, the “Poppy Lady,” as Madame Guerin was now known, arrived in the United States. She came to speak in support of the “Victory Loan” – financial assistance to help France’s homeless and jobless get back on their feet. While stateside, she asked the newly formed American Legion to sponsor the poppy program in the United States. At their second national convention in Cleveland in September 1920, the American Legion passed a resolution making the poppy their official flower. At the next year’s convention, however, the delegates repudiated the poppy and instead adopted the daisy as the organization’s official flower.
When the Poppy Lady turned to the VFW for help, the organization readily agreed to take over from the American Legion. In May 1922, the VFW conducted the first nationwide distribution of poppies in the United States. Then, at its National Encampment in Seattle in August 1922, the organization adopted the poppy as the official memorial flower of the VFW. All over the country, the little red flower became known as the “Buddy Poppy.”
In February 1924, the VFW registered the name “Buddy Poppy” with the U.S. Patent Office. On May 20, 1924, a certificate was issued granting the VFW, under the classification of artificial flowers, all trademark rights to the name of “Buddy.” No other organization, firm, or individual can use the name “Buddy Poppy.”